An example of typical lies by ukrainian officials.

Luhansk. These people are not "shot by terrorists" as Ukraine officials, mass media and bloggers shamelessly claim. They are killed by ukrainian army artillery 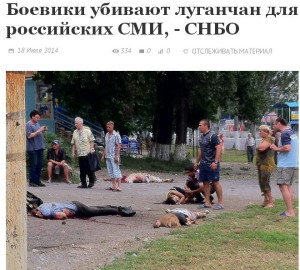 Ukrainian NSDC (National Security and Defense Council) falsely claims (18.04), that rebels are driving around the Luhansk city and shoot people - specially for russian television... "They shot several buses. About 20 people are down". Ukrainian liars are "quoting" Luhansk city administration as supporting their lies.

Luhansk city administration informs (18.04): "Today the city is under the intensive [artillery] fire. The shells are falling down practically in all districts <>. According to preliminary information, since the morning about 20 civilians are killed."

Before 18.04 in Luhansk due to ukrainian army fire: